Failure Is Not An Option – Or Is It?

I was watching a documentary on Apollo 13 last night, I like the film based on the event and imagined the documentary would provide 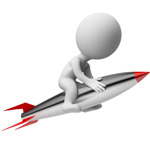 Actually, it all turned out to be horribly cheesy; with an overly dramatic voice-over, and tedious music. What I did take away from it though was that the famous, “failure is not an option” line made by Gene Krantz the flight director, well actually he never said these words, but let’s not spoil a good story.

I think these words are often interpreted as almost a threat, you must not fail at any cost, ever. Actually, it was a summation of the feeling to the team that, we have a serious situation here and if we do fail people will die; so let’s just accept that there is a solution we just need to find it. All perfectly reasonable, and yet we often seem to imprint the same reasoning on all aspects of our lives; even minor ones where loss of life is at very low risk.

I noted this on a recent LinkedIn exchange on one of our groups where there was a back and forth on what decision to make. That exchange too felt like the fear of getting it wrong, that failure was a huge influence. We all must make decisions that amount to taking a chance, and once we have weighed up the possible risks (as far as we can reasonably predict) then we are obliged to take a deep breath and jump in.

To put it into some context, if I were to tell you about a person who had never failed at anything for their entire life (let’s consider them to be around 50 to make it challenging) would you believe that such a person existed? Hopefully not, but if they did exist they be the dullest person in the world.

Because they will never have tried anything that was new. They will be looking for problems everywhere, they would undoubtedly be so frightened of what might happen that they would not be able to live with anyone, (being unable to control the world around them would mean their loved ones would not be allowed out). Not a good picture.

And yet we might scoff at that portrayal when there is a little bit of that person in us all. Frightened of what might happen if we fail. It will be different things for each of us of course but it is such a strong human driver that we really need to call it out and frankly offer it a punch on the nose.

What has happened when you have failed?

You may instantly go, I was embarrassed, I felt miserable, but you bounced back right?
Actually, if I ask that question again and say, what positives came out of the last time you failed you might be able to summon a long list;

The list, I am sure you will agree is endless.

No one wants to fail but it is an absolute pre-requisite to any success. It is through failure that any of us learn how to improve, innovate and reap the rewards of real satisfaction. The joy of not ‘settling’ for the easy option but of challenging ourselves to do more and be better.

In the US there is a real acceptance that failure is part of business. Indeed a question asked at many interviews is tell us about your failures and what you learnt from them. A couple of failed businesses along the way is seen as a good thing, on the basis that we all have some pretty spectacular failures within us, and if you have already failed and worked out what went wrong and corrected the problems, then you will be a safer bet. Worse to be the individual who has never failed; they might just be due a big one now.

I appreciate that might be a little way off, but how would you answer such a question in an interview or meeting with a potential new client? If you said you had never failed, they would not believe you (so trust is broken) or that you were so lacking in self-awareness that you would be a bit of a pain to work with. Much better to consider this now, think of a failure, and embrace it. You learnt so much more from that experience than most of your successes, once you can reflect on that you will be presenting a more rounded and interesting personality that others will want to engage with.

Each time we are a bit braver we reap the rewards of courage because we are often more successful the more calculated risks we take; oh and don’t let the word calculated allow you to take yourself off the hook. Just do it!